Second chance planets overcome challenges to become habitable, like the Little Engine that could. (Hopefully they will cheer you up after learning about how planets die.)

To make something better, sometimes you just need to get rid of the outside.

This might be scraping off a tasty cupcake’s nasty cream cheese frosting.  Or melting off a layer of ice from your car in the morning.

And sometimes removing the outer atmosphere from a Neptune-like planet can reveal an ocean paradise!

Our story stars with exoplanets.

Statistically speaking, most– if not all — stars have planets orbiting them.  Check out this hypnotic animation of 1800+ exoplanets:

A third to half of all stars in the Galaxy have super-Earths or mini-Neptunes.  These planets are between Earth and Neptune in size and closer to their stars than Mercury is to the Sun.

We think of “super-Earths” as scaled-up Earths, meaning big rocky worlds.  Mini-Neptunes, on the other hand, are scaled-down gaseous planets like Neptune (which is 4 times the size of Earth).

I’ve written about how super-Earths and mini-Neptunes form, and why we don’t have any in the Solar System.  There are even MOJO videos on those subjects (here and here).

In this post let’s think about what happens to mini-Neptunes after they form.

Mini-Neptunes are bigger in size than super-Earths but not much more massive. Their outer layers are almost certainly low density hydrogen gas. It only takes a speck of hydrogen — a percent of the planet’s mass or less — to puff up a planet’s size.

The outer layer of gas on a mini-Neptune is not that stable. These planets are so close to their stars that they’re roasting hot. And their gravity is not that strong.

Mini-Neptunes’ atmospheres can evaporate! Those outer layers can be heated up by radiation from their stars and escape out to space.

Cartoon of a mini-Neptune close to its star losing its outer atmosphere to leave behind an Earth-like planet. Credit: Rodrigo Luger/NASA images.

What is left behind when a mini-Neptune’s atmosphere evaporates? This picture makes it seem like the cores of mini-Neptunes are pristine, beautiful Earths.

The truth is, it depends on how mini-Neptunes form.

The building blocks of solid planets are mainly rock and ice (and some iron).  Some mini-Neptune cores might have compositions like Earth, but many probably migrated inward from the colder reaches of their systems and formed with a lot of water (ice).

Only mini-Neptunes very close to their stars can be evaporated down to their cores. You might think that excludes any possibility for liquid water (or life).  But the habitable zones of puny stars are very close-in:

A comparison between the habitable zones of Sun-like (G) stars and those of smaller stars.  Credit: NASA ESA, Z. Levy (STScI)

Mini-Neptunes’ atmospheres can be evaporated away in the habitable zones of low-mass stars.

Low-mass stars take hundreds of millions of years to settle down.  In that time they are much brighter. Plus, they are actively spewing high-energy radiation all over the place.

For Proxima b we were worried that the star’s early hot phase could have evaporated off all of the planet’s water.

From this poem on the discovery of Proxima b, an Earth-mass planet in the habitable zone of the closest star to the Sun.

But puny stars’ early hot phase also helps evaporate mini-Neptunes’ atmospheres!  It’s like removing the outer layer of nasty frosting from a tasty chocolate cupcake.  (I do like many kinds of frosting, but not the overly-thick cream cheese kind — barf!)

Mini-Neptunes with orbits in the habitable zones of puny stars may have their atmospheres evaporated away to reveal their cores.  Could these cores have the right conditions for liquid water and (if we’re lucky) habitability?

Absolutely.  The researchers who figured this out called called them Habitable Evaporated Cores.

And there’s a bonus. One you could breathe.

As I explained above, a lot of these cores probably form with substantial amounts of water.  During a star’s early hot phase it not only strips away a mini-Nepune’s hydrogen atmosphere.  It also can evaporate off any water that’s in the atmosphere.

Energetic (ultraviolet, or UV) photons break apart water into hydrogen and oxygen. The (light) hydrogen is evaporated off the planet quickly, but the (heavy) oxygen sticks around. 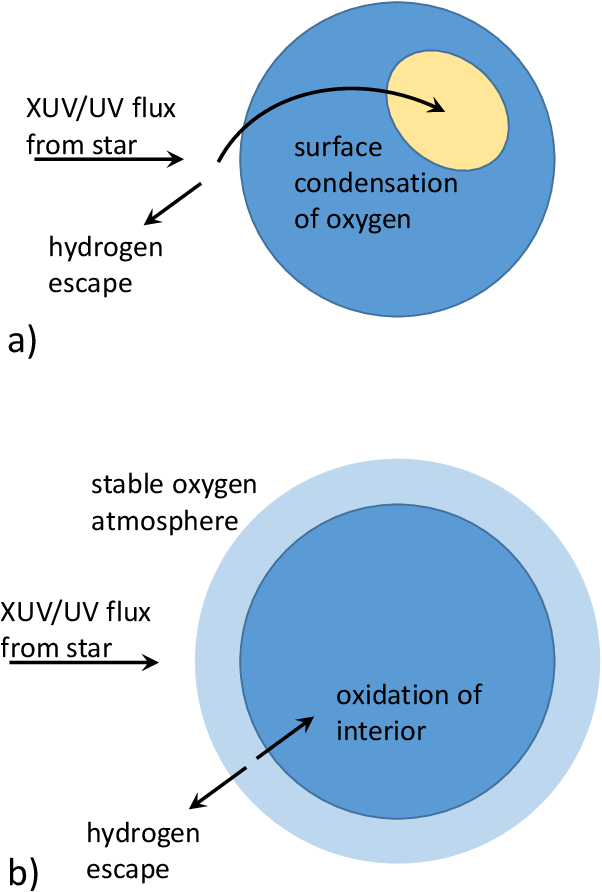 What happens to oxygen when water is evaporated from a planet’s atmosphere.  First the oxygen condenses on the surface (in cold places). In time oxygen builds up in the atmosphere.  From Wordsworth & Pierrehumbert (2014).

The leftover oxygen slowly builds up in the atmosphere.

The atmosphere can end up with as much oxygen as on Earth or even more.  Our oxygen comes from life but on evaporated cores it comes from the loss of water.

Does this mean that habitable evaporated cores can have water or oxygen but not both?

Luckily, no.  These processes aren’t just on/off switches. There is a whole spectrum of outcomes. The extreme case is a planet that loses all of its hydrogen and all of its water and ends up a dried-out, oxygen-rich rock.

The ideal scenario is a mini-Neptune that loses its hydrogen but only some of its water, leaving behind a rocky planet with oceans and some oxygen.

Some mini-Neptunes hold onto some of their hydrogen and most of their water.  They might be covered in deep global oceans but shrouded under a thick layer of hydrogen.

Other planets lose all of their hydrogen and water, then later burp out oceans from their interiors (by volcanic outgassing), liberating water from hydrated rocks.  They could in theory end up with Earth-like oceans.

Realistically, a lot of mini-Neptune cores will end up being not quite right for life (as we know it).  Some will be big barren Marses, or giant roasting Venuses, or small Titans, or … who knows?

Luckily, puny stars are so common that there are literally hundreds of billions of chances in our galaxy to end up with habitable evaporated cores.

There are other astrophysical mechanisms to evaporate away the atmospheres of mini-Neptunes.

Artist’s impression of the quasar ULAS J1120+0641 looked up close.  The central black hole is more than 2 billion times the Sun’s mass. The quasar is the oldest seen, dating to just 770 million years after the Big Bang.  Credit: ESO/M. Kornmesser

There is a lot of high-energy radiation near supermassive black holes.  It is generated by gas and torn-apart stars falling onto the black hole.

This radiation can evaporate away planetary atmospheres.  It’s a lot like mini-Neptunes very close to their stars. But here what matters is not how close a planet is to its star but how close a planet and star are to the center of their (active) galaxy.

The atmospheres of mini-Neptunes close to the center of active galaxies should all evaporate.

This begs the question of whether such planets could form in the first place.  It’s a worthwhile question that I’m not sure anyone has carefully studied.

It’s also unclear whether a core that was evaporated in such a harsh environment is a good place to live.  Uncertain, but definitely interesting to think about.

Artist’s impression of a mini-Neptune’s atmosphere being blown away by the radiation from the galactic center (at top right).  Credit: M. Weiss/CfA.

If evaporated cores around puny stars have lost some water then they’ve already got oxygen in their atmospheres.  If they still have some water left then they’ve got oceans!  Plus, they’re already in the habitable zone!

An oxygen-rich, habitable evaporated core seems like an ideal spot for galactic refugees to land. They’ll just need to plant trees and make some cupcakes. (But please, no cream cheese frosting!)

But life on Earth arose without oxygen.  It took more than a billion years for oxygen to accumulate in the atmosphere, produced by cyanobacteria. For early life, oxygen was poison.

So habitable evaporated cores with oxygen are great places for humans and present-day Earth-life to colonize, but could not have produced the same evolution of life as Earth.

Also, since these planets are such good science fiction settings I’ll also throw this post in Real-life Sci-Fi worlds.