This post is the sequel to Real-Life Sci-Fi Worlds 11: Kalgash, a planet in permanent daytime (from Asimov’s Nightfall).  Beware: the later parts feature rings of stars orbiting black holes (with some planets too)…

Nightfall. The classic Asimov story (and later, book) set on Kalgash, a planet that experiences permanent daytime except for once every 2049 years.

In a previous post I set up the Kalgash 6-star system according to the book:

Sorry, Asimov, your system doesn’t work.  But don’t worry, you are still one of my heroes! And I’m here for you. I’m going to fix the Kalgash system to make Nightfall work.

In this post I will build several different functional Kalgash systems in which the planet really is in permanent daytime.  In my opinion, the last couple systems are the coolest ones I’ve ever engineered…

The original Kalgash system had 6 stars. That makes keeping its planet in permanent daylight seem like a complicated problem. But it’s really not.

Take any old planet orbiting any old star.  At any given time, half of the planet is lit up by the star.  A single star has already done half our job! Even more than half, since we’ll take advantage of the fact that on Earth, twilight keeps the sky bright until the Sun is about 15 degrees below the horizon. That gives us 10 hours of darkness per night (assuming the planet spins in 24 hours like Earth). 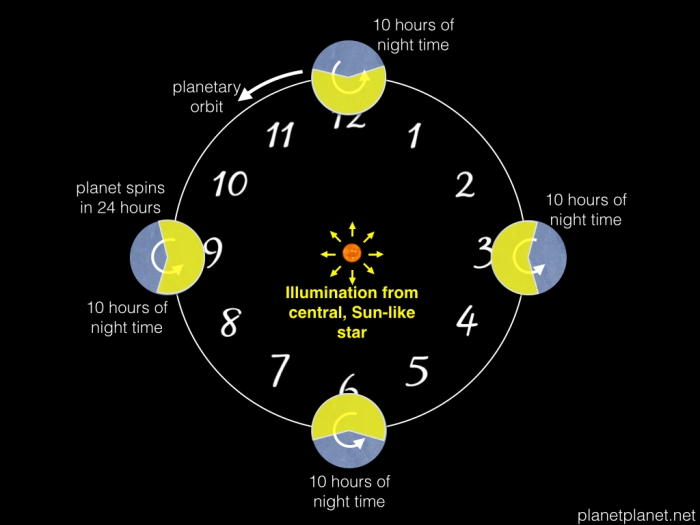 All we need is to illuminate the half of the planet that’s pointed away from the central star. This is tricky, because at face value it would take a ring of stars to do this (more on that later — wink, wink).

We can create permanent daylight with just two more stars.  Put those stars on opposite sides of the sky, say off in the distance at 3 and 9 o’clock in the image. Then the side of our planet pointed away from the central star is always lit up.  Boom!

For this to achieve our purpose we need the right stars on the right orbits. We need stars that are bright enough to light up a planet (say, to make the surface at least 1% as bright as high noon). And they need to remain on opposite sides of the sky.

But stars can’t stand still (kind of like dogs or my kids).  Gravity is always sucking them in (kind of like the Sarlacc pit, but, actually, forget that, it’s completely different). To make our star system stable the stars need to orbit around each other.  Luckily we know how to do that (see previous posts here and here).

To maintain their opposite-side-of-the-sky configuration we want our stars to orbit as slowly as possible. This means that their orbits must be as wide as possible. Star systems are organized in a hierarchical way, with orbital sizes that follow a 1, 10, 100 pattern (rather than 1, 2, 3).

Let’s go from the outside-in.  In the past I’ve explained how the Galaxy disrupts very distant orbits. The widest plausible orbit is generally about 1,000 Astronomical Units (or AU; 1 AU is the Earth-Sun distance) but I’m feeling generous today so let’s make it 3,000.  That will be the size of the largest orbit in our first Kalgash system.  The next-closest one will be ten times smaller, 300 AU.

There aren’t a lot of stars luminous enough to fit the bill.  Let’s go with a red giant like Aldebaran for the inner star and a blue supergiant like Rigel for the outer one.  Here is what our Kalgash 3-star system looks like:

Of course, the stars move along their orbits so they aren’t always on opposite sides of the sky.  The time it takes for their configuration to change is mainly determined by the faster orbit of the closer-in star (which is why I stretched their orbits out a little farther than in the past). The red giant at 300 AU is little more massive than the Sun and takes a bit longer than 3000 years to complete an orbit.  Meanwhile, the blue supergiant is more than twenty times the Sun’s mass and takes more than 30,000 years.  (The image is centered on the central star — in reality all the stars are orbiting each other, or more precisely, their common centers of mass).

Let’s take a look at the illumination on Kalgash. As we’ve done in the 5-Sun Earth series, it’s helpful to put Kalgash’s orbit on a clock face.  The blue supergiant is way off to the left (in the direction of 9 o’clock) and the red giant is off at 3 o’clock.

When the two stars are diametrically opposed there is no darkness on our planet.  But the stars are moving: it takes the red giant about 275 years to pass between numbers on the clock face, and it takes the blue supergiant about ten times longer.

Our no-darkness-on-Kalgash setup only lasts as long as the red giant is between 2 and 4 o’clock.  It takes the red giant 550 years to move that far.  In that time the blue supergiant has shifted a little, so the two-stars-on-opposite-sides-of-the-sky configuration ends up lasting for about 600 years.

That is our first Kalgash system. And it works pretty well: 600 years without darkness is not too shabby!  But we’re not quite there.  We haven’t reached the 2000+ years of daylight like in the book.  And, even worse, this system has 600 years of constant daylight but that configuration only happens every few thousand years (a little less than once every red giant orbit).  Finally, when darkness falls in this system it would be very slow.  Much slower than a sunset on Earth or an eclipse (which is what happens in Nightfall).

Let’s borrow a trick from the Ultimate Engineered Solar System.  In that system I showed that a ring of 42 Earths orbiting the Sun is perfectly stable for billions of years.  It’s weird but true!

Let’s take that idea a step farther. Could a ring of Suns be stable? Yes, as long as a few conditions are met:

No stars exist today that are 1000 times more massive than the Sun.  What this means is that the central body must be … drum roll, please … a black hole!  (Pretty much the coolest objects in the Universe!)

Let’s build a ring of stars around a black hole! We’ll use a black hole a few thousand times more massive than the Sun. Then we’ll make a ring of 8 Suns evenly spaced along their orbit. Here it is:

We will use this ring of stars to provide the external illumination for our Kalgash 2 system. That means we need the planet (and its own central star) to be interior to the ring of Suns.

It is simpler if we make the planet’s central star a red dwarf star. Red dwarfs are fainter than the Sun. Let’s choose a half-Solar-mass star (just like for the original Ultimate Solar System). The planet orbits in the star’s habitable zone at about 0.2 AU. The star’s orbit around the black hole must be relatively wide to make sure that the planet’s orbit is stable. Let’s put it at 10 AU. The ring of stars is a bit farther out. It’s perfectly stable if we make the ring 20 AU-wide.

Here is what we’ve got:

Again, the central black hole is an image of Gargantua from Interstellar (Paramount/Universal).

The Kalgash 2 system works!  As the planet orbits the star, the red dwarf-facing side is always lit up.  And its backside is never more than about 10 AU from another Sun-like star, which would provide 1% of the Sun’s brightness.  Boom!  Permanent daylight!  (Disclaimer: there are some times when the distance would be slightly above 10 AU but this is easily fixed by putting slightly more massive, brighter stars in the outer ring).

Is it possible to make the Kalgash system with a single ring of stars?  Just barely if we squeeze things. For stars orbiting a black hole there is a region around a star in which the star’s gravity is stronger than the black hole’s.  That is called the Hill radius (it’s also called the Roche lobe in some contexts). For a planet to orbit a star that orbits the black hole, the planet’s orbit around the star must be smaller than the Hill radius (smaller than half the Hill radius for a prograde orbit, smaller than the full Hill radius for retrograde).  To guarantee stability within the ring of stars, each star must be separated from its neighbors by at least 12 Hill radii.  Of course, the planet orbits within its star’s habitable zone, receiving about the same amount of energy from its star as the Earth does from the Sun. Other stars are fainter by the square of the relative separation.  So for the widest-possible prograde orbit at half the Hill radius, the closest stars are 24^2 = 576 times fainter than the main star. That is 5 times fainter than our 1%-as-bright-as-the-Sun cutoff.  For the widest-possible retrograde planet orbit, neighboring stars are 12^2 = 144 times fainter, just below our 1% cutoff.  Let’s be generous and make this thing happen.

There is one more issue. Three stars in a ring do not form a line.  As viewed from the middle star, the two neighboring stars are 135 degrees apart in the sky.  This is 45 degrees  from a straight line (which would be 180 degrees in this way of measuring).  As twilight only works down to 15 degrees below the horizon, this means that there is a 15 degree-wide slice of the planet’s orbit around its star in which night can fall. For 1 month every year there would be 1 hour of darkness.  That’s no good!

We can fill this hole by using a 12-star ring.  That way neighbors are never more than 30 degrees apart on the sky.

Here is the Kalgash 3 system made with a single ring of stars: 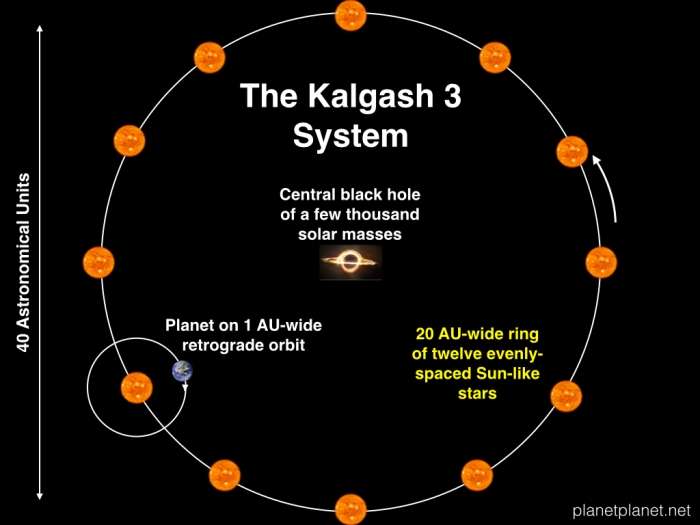 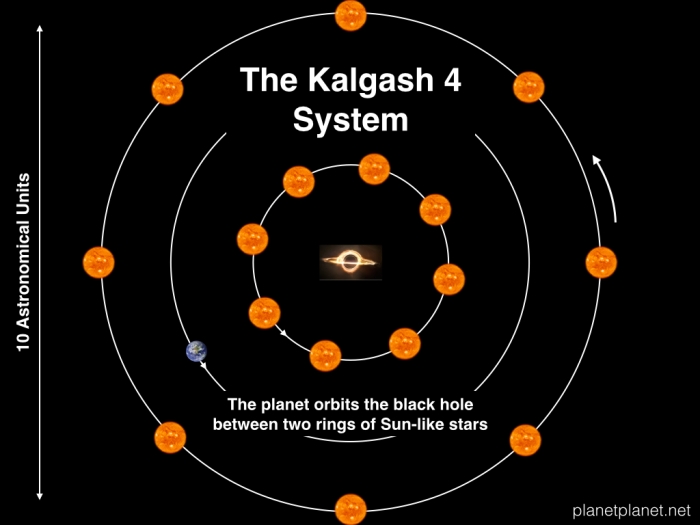 There are a plethora of twists on this theme. Here are a few: 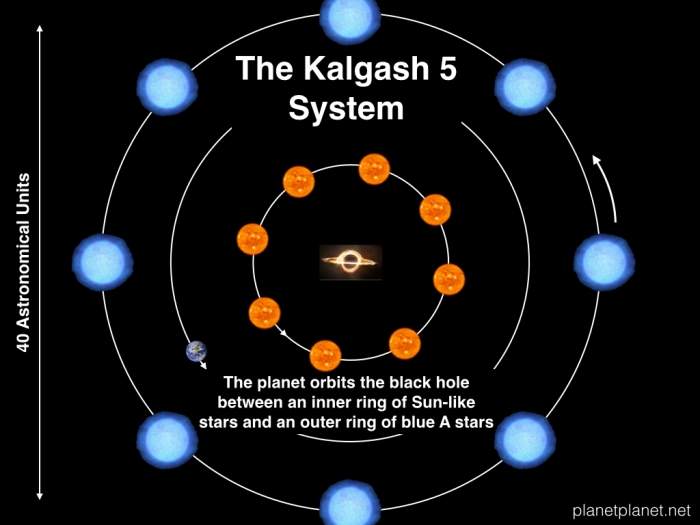 The list of variations goes on.  And all of those possible systems would be just awesome.

There is one last detail to think about.  What could make darkness fall on the planet in these systems?

The simplest situation is the Kalgash 3 system with its single ring of stars.  If the planet had a large moon, it could occasionally eclipse a neighbor star and create darkness.  It’s questionable whether such a moon would be stable (because of tidally-driven orbital changes) but for now let’s go with it.  Even though these eclipses would create darkness it’s not clear why darkness would only fall very rarely. Instead, eclipses should be relatively frequent, even if the moon’s orbit is tilted with respect to the orbit of the ring.

The Kalgash 2 system, with an outer ring of stars, might provide a solution.  Imagine that the planet in this system has two large moons. Since the central star is not within the ring there is no issue of stability of the moons. Each moon occasionally eclipses one of the stars in the outer ring.  But only extremely rarely would there be simultaneous eclipses of the two closest outer stars, the only ones that could provide any significant illumination.  That could explain the very rare darkness.

For systems with many rings of stars it’s challenging to imagine how darkness could ever fall.

OK, that wraps us up.  You might say that I “engineered” four Kalgash systems for Dr Asimov, with a multitude of possible variations. Boom!

All the settings I found to work include a ring of stars.  I have not come up with a viable Kalgash solution that is not engineered in this way.

36 thoughts on “Asimov’s Kalgash: a planet in permanent daytime (for real this time!)”