Listen up ladies and gents near and far
A planet’s been found ‘round the Sun’s closest star.
Proxima Centauri – 4 light years from us –
has got a new planet I want to discuss.
This planet and star, now, you really should know ‘em
And that’s why I’m bothering writing this poem.

There’s three things that make this new planet so cool
and make us astronomers everywhere drool.
The first is its size: it’s almost like Earth.
Just a smidge bigger, it’s near the same girth.
This means that, like ours, it’s a quite rocky planet.
It’s not made of gas; maybe iron or granite.

The third thing to know is the planet’s so near
that soon we’ll be able to see it quite clear.
They’re building a telescope that’s big and sees far.
It’ll take photos of Proxima b round its star.
Remember, the planet is Proxima b.
Proxima Centauri is the star that you see.

The question on the top of everyone’s mind:
Is there life on this world? Could it bear humankind?
Could this planet be teaming with insects like ants?
Or mammals like tigers? How ‘bout leafy plants?

To answer this question let’s turn back the clock
to when the planet was just a wee baby rock.
When Proxima the star was born it was brighter.
The planet was hotter. Its atmosphere lighter.
Some of its water escaped off to space.
But was it enough to dry out this fair place?
(If so, I’ll be wearing a sad frowny face.) 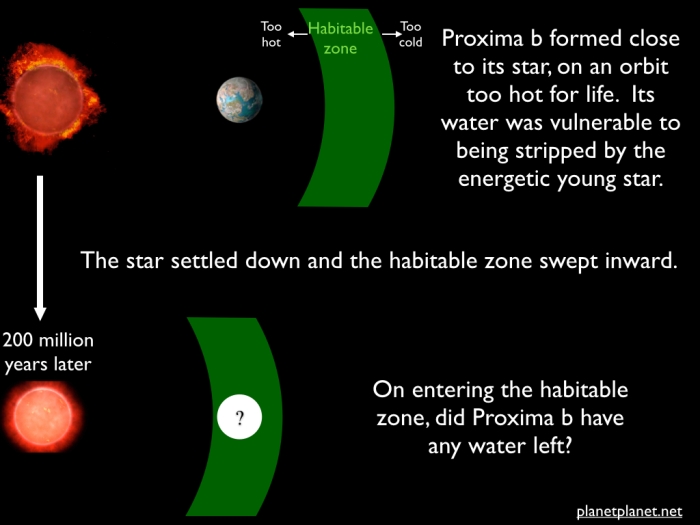 It took quite a while for the star to chill out.
And during that time, Proxima b lost about
enough water to fill oceans, and even lagoons.
But what does that mean? Well, if we assume
that the planet was born just as wet as the Earth,
it would have held on to some water from birth.

“On Proxima b,” you ask, “what is the weather?
Should I wear cotton or spandex or leather?”
I’m glad that you asked. I have a suggestion.
Some nice climate models might answer your question.

If the planet spins quickly, then its hottest region
is at the equator each and every season.
This is where we would find big oceans and lakes.
We could sit by the seaside enjoying milkshakes.

Now, if Proxima b has just one big deep ocean
with no land in sight, only water in motion,
the poles would be covered with ice that won’t melt
and warm water flowing along the world’s belt.

Watch this animation from a simulation
Of the just aforementioned situ-eye-ation:

Climate simulation of an ocean-covered Proxima b, assuming an Earth-like atmosphere (in composition and thickness).  Here the planet spins 3 times for every 2 orbits around the star.  The colors correspond to the surface temperature in degrees Celsius.  Credit: Jeremy Leconte/Martin Turbet/LMD. From this paper.

if Proxima b has a very slow spin
then, like our moon, the same side will point in.
The hottest place will be where the star’s overhead.
The Sun doesn’t move, it just sits there instead.
And the opposite side sees the Sun not at all.
It’s always in darkness, with sky but that’s all.

This planet gets astronomers very excited.
Eye docs of the world should be very delighted!
If this is the case, it’s an “Eyeball” in space:
a water world with only H2O on one face.

Take a look here and see, one side’s covered with oceans
That go slish, slosh and slush and are always in motion!
On the day-side you can walk and wade in the tide,
But, everything’s frozen back on the night-side.

Proxima b as an Eyeball planet.  This is from a climate simulation of Proxima b assuming its surface is covered with oceans and the planet’s spin is locked to its star.  Credit: Jeremy Leconte/Martin Turbet/LMD. From this paper.

Answers won’t come for 10 years or more.
But, please don’t despair, we can learn much before.
New discoveries in space are made all of the time.
I’ll keep blogging for you, though, not always in rhyme.

Before I end, let’s give three cheers to Proxima b!
The planet that might be an Eyeball, you see.
This planet might even have snowfields and seas.
And, maybe, just maybe, some dolphins and trees.
While the planet’s too far for humankind’s Plan B
it’s the number one target to search for ET.

A massive thank you to Marisa Raymond, my co-author on this poem!

10 thoughts on “Is our closest neighbor an Eyeball planet? A Proxima poem”