A couple years ago, I had to jump through an administrative hoop to be officially allowed to advise students. Yet I was being judged in part on my track record advising students. I needed to demonstrate my advising skills before being allowed to do any advising. It was a classic chicken-and-egg problem.

Life itself is caught in a chicken-and-egg situation. For life to exist on a planet, the planet must of course have the right conditions for life. The planet must be habitable. But a planet’s habitability depends in large part on whether it already has life. It’s a lot easier for a planet with life to be habitable. So a planet needs life to be able to host life….

This is pretty confusing. Let’s break it down, with some help from a really nice (short and accessible) article by atmospheric scientist Colin Goldblatt (free link to article here).

We call a planet habitable if water can be liquid on its surface. The factors that influence a planet’s habitability include its atmosphere and the size of its orbit. And if water is on a planet’s surface it must also be present in the atmosphere. The simplest planet we can imagine would have a pure water atmosphere. Ironically, this planet would not be a great choice for life because its habitable zone is extremely narrow (more details here). There is only a very limited range of orbital distances for which this planet could have lakes and oceans. And Earth’s current orbit doesn’t even fall within this narrow range. If Earth’s atmosphere were pure water it would be a frozen iceball of a planet (think Hoth)! 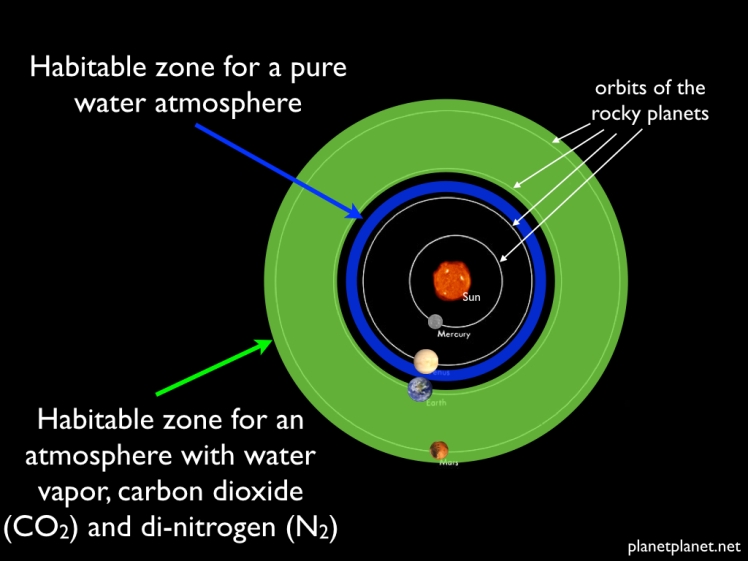 The habitable zone is much wider for planets with other gases in their atmospheres. Earth owes its habitability to carbon dioxide (consisting of one carbon atom and two oxygen atoms; chemical code name CO2) and di-nitrogen (two nitrogen atoms; N2). CO2 is a greenhouse gas: it absorbs infrared light and acts to blanket the Earth by making the planet cool off more slowly (like a sleeping bag). N2 is a background gas that does not absorb much light itself.  It does scatter some sunlight but its main role is to make other gases absorb more efficiently. In concert, CO2 and N2 push the habitable zone outward and widen it. These gases are essential for life on Earth.

What controls the amount of CO2 and N2 in a planet’s atmosphere? How did Earth get so lucky to have the right amount?

Earth’s carbon cycles through the planet. Atmospheric CO2 is removed by acidic reactions with exposed rocks, then the carbon is put into ocean floor sediments called carbonates. Most of Earth’s CO2 is indeed found in the ocean seafloor in the form of carbonate rocks. In time, the seafloor is subducted into the mantle where carbonates are heated and CO2 is released back into the atmosphere by volcanoes. This carbonate-silicate cycle is remarkable in that it serves as a thermostat for the Earth.

How much CO2 actually enters the atmosphere is determined by a balance between the atmosphere and the oceans. In several key places, life plays a key role. Biology increases the efficiency of weathering and the deposition of carbonates in the oceans, keeping the atmospheric CO2 abundance low. A lifeless Earth would have more CO2 in its atmosphere than the current Earth.

Venus is in the opposite situation. Almost all of its CO2 is in its atmosphere. It does not have the capability to create carbonates so the CO2 has nowhere else to be. With such a huge abundance of greenhouse gas in its atmosphere, Venus is the hottest planet in the Solar System.

To summarize, a planet’s atmospheric CO2 content is complicated. It is controlled by a combination of geology, ocean chemistry, and biology.

The controls that affect the N2 in a planet’s atmosphere are less well understood. On Earth, it has only recently been discovered that much of Earth’s N2 is trapped in the mantle. Yet the only mechanism that can transfer N2 from the atmosphere into rocks requires life to operate. The nitrogen inside the Earth indeed originated in biology. So life plays a role in how much N2 is in the Earth’s atmosphere.

This means that life is one of the key controls on how much CO2 and N2 are in Earth’s atmosphere.  And those gases are directly responsible for Earth’s ability to have oceans and lakes and therefore life.  The chicken and egg again!

Finally, it is interesting to note that there is no one “solution” to what a planet’s climate should be. At the same orbital distance there are many different possible climates. A dramatic example of this idea is the “snowball Earth”. Imagine all of Earth’s water was frozen and the planet was entirely covered in ice. Ice is so reflective that much less of the Sun’s energy would be absorbed by a snowball Earth than a normal Earth. Our planet would be completely stable as an ice-covered world, a snowball Earth (see here for another post where we discussed the snowball Earth).  What is amazing is that there is geological evidence than Earth may have undergone several snowball episodes!  During these intervals — which were each several million years long, Earth may actually have looked like this:

It turns out that there are not just two possible stable situations for Earth’s climate, but four.  But the other two possibilities are not happy places to be.  The first is what I call the steamball Earth (Goldblatt calls it a hot moist Earth).  On a steamball Earth the atmosphere contains a lot of water and the planet’s surface is very hot, close to or even above the boiling point of water.  The planet is continually heated by the greenhouse effect arising from all the water vapor in its atmosphere.

The last possibility is the dry roasted Earth, which has a very hot surface (900 Kelvin or higher — several metals such as lead and magnesium would melt) after losing all of its water. This is essentially what Venus is like today. A good planet gone bad.  In Goldblatt’s calculations Earth is just barely protected from the dry roasted state (see Fig. 5 here) but I’m including it as a possibility because it becomes stable with just a couple percent more solar energy.

From the point of view of habitability, Earth is clearly in the best of these possible climates.  But why?  We just don’t know.  There are some geological feedbacks like the carbonate-silicate cycle that seem to keep our planet on track.  But, snowballs can happen!  Luckily, Earth recovered from its snowball phases.  But could Earth ever recover from a steamball phase?

It is our atmosphere that keeps Earth livable.  In particular, it is the CO2 and N2 in our atmosphere, whose abundances are controlled by life. Our planet seems to owe its ability to host life to life itself.

I will leave you with the concluding paragraph of Goldbatt’s study:

“Life, we see, has entered the business of controlling the boundaries of its own habitat in space and time, niche construction in ecological parlance. As we view Gaia through the atmosphere, we see that habitability and inhabitance are inseparable.”

We are stuck with the chicken and the egg.

ps – What about Mars? The Red planet falls within most estimates of the Sun’s habitable zone. But its puny atmosphere is too thin to heat the planet sufficiently for life. But what if things were different?  I’ll tell you – if I were to build a better Solar System things would look a lot different!

7 thoughts on “No livable planets without life”