Welcome to Real-life Sci-fi worlds.  We are using science to explore life-bearing worlds that are good settings for science fiction.

Let’s take the Earth and change just one small characteristic: the shape of its orbit.

Earth’s orbit is nearly a perfect circle.  Earth is always the same distance from the Sun (to within a few percent).  So Earth receives the same amount of energy from the Sun throughout the year.  [It’s the tilt of Earth’s spin axis — not changes in the Earth-Sun distance — that causes the seasons, of course.]

Many of the known extra-solar planets have orbits that are pretty elliptical (we talked about this in a previous post). The average “eccentricity” is about 25% or 0.25.  An eccentricity of zero means a perfect circle and 1 is infinitely stretched out.  The higher the eccentricity, the farther the Sun is from the center of the ellipse. 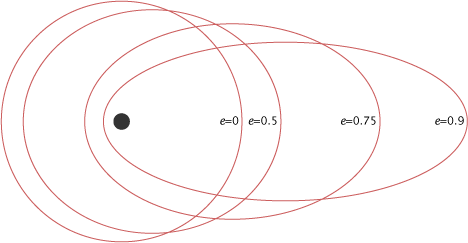 Orbits with the same average distance but different eccentricities e. The higher the eccentricity, the more stretched out the orbit. Credit: NASA Earth Observatory.

The more eccentric an orbit is, the closer it passes to the star at its closest approach.  At the same time, the planet passes by this closest approach very fast.  The planet spends most of its time far away from the star.  The total amount of energy received by the planet is higher for eccentric orbits, but only by a very small amount unless the orbit is extremely elliptical (with e larger than about 0.5-0.75.

Motion of a planet on an elliptical orbit. Rp and Ra are the planet’s closest and farther approaches from the star.  From Wikipedia Commons.  [FYI, this website has a nice interactive orbit simulator.]

On a planet with a stretched-out eccentric orbit, everything is more extreme than on a circular orbit.  The hot is hotter and the cold is colder.

For a very eccentric orbit, the planet is basically branded during its very short closest approach to the star.  The planet then spends the rest of its orbit — especially the long cold winter far from the star — cooling off.  Like running from the hot tub into the snow and then back (although if you’re like me, you spend a lot more time in the tub than in the snow, but planets in orbit do the opposite!).

An eccentric Earth is not uniformly heated.  There are much larger temperature swings than on Earth.  Still, the entire globe of an eccentric Earth with the same average orbital distance as Earth is habitable.  What matters is the total energy received over an orbit, not the instantaneous heat from the star.

There is a particularly interesting place on an eccentric Earth.  It is the location where the star appears directly overhead during the planet’s closest passage to the star.  This is where the planet is branded.  This location receives a short burst of heat that is stronger than anywhere else on the planet.  [In reality, it is of course spread over some area.]  Let’s call it the branding spot.  But the planets were are talking about are spinning and they spend many days near closest approach.  So the branding “spot” is really a ring at constant latitude.  Imagine the tropics but shifted up or down to any latitude.

Is it good or bad to be sitting on the branding spot?  Well, it depends.  For a planet with the same average orbital distance as Earth, there is a danger from overheating.  If the orbit is eccentric enough then the branding spot gets fried.  Not the place you want to be!

But if the planet is much colder then it could be nice to be near the branding spot.  To be close to the once-a-year burst of heat in an otherwise icy world.  This image shows a pretty cool example taken from a real climate model.

Temperature map of the climate of eccentric Earth over a full year.  The temperature at a given latitude on the planet can be read by the change in color along the horizontal line at that latitude.  White means frozen and other colors indicate habitable temperatures. The planet is a desert world with an eccentric orbit. The only place that is heated enough to melt the ice is at the South pole once per year. Taken from this scientific paper by Courtney Dressing and collaborators (including me!).

The branding spot of this planet is at the South pole (it’s actually a spot, not a ring, since it’s located at the pole).  The entire planet is covered in ice.  But once per year the South pole is heated sufficiently that it melts and produces conditions friendly to life.  This only lasts for about a month before freezing over, but it is the only time on the entire planet that it happens.

The typical giant extra-solar planet has an eccentricity of about 0.2-0.3.  Unfortunately, it’s very hard to measure the orbital shape for small planets.  There is some evidence that smaller planets tend to have less eccentric orbits, but it’s pretty tentative.  Simulations also show that small planets probably have more circular orbits than giant planets.  But those same simulations also show that some Earth-sized planets should actually have very elliptical orbits.  So even though eccentric Earths are likely to be less common than eccentric Jupiters, they should still exist. In fact, it is planet-planet scattering among Jupiters that probably stretches out the orbits of the Earths anyway!

Some ballpark figures.  About 10% of stars have a giant planet like Jupiter.  80% of those underwent planet-planet scattering.  Earth-like planets survive half of the time.  10% of these have orbits with eccentricities larger than 0.2.  That makes a few eccentric Earths per thousand stars.  There are more than 1000 stars within 50 light years of the Sun.  So there are likely to be a few eccentric Earths close by.  I wouldn’t be surprised if an eccentric Earth turns up in the coming years (or is already lurking among the known planets).

What kind of story could take place on an eccentric Earth?  What is different about an eccentric Earth is how the climate changes in such an extreme way during the year.  And the most interesting location is the branding “spot” or ring.

Story 1 takes place on the icy world shown in the climate simulation above.  The planet completely covered in ice except for one month a year at the South Pole.  It is freezing and pretty Hoth-like.  A cold cold place.

There is a network of tribes that survive on the icy world.  Given the harsh conditions the population density is low.

Each tribe is adapted to its local ecosystem.  Some tribes specialize in fishing through holes in ice-covered lakes.  Others follow and hunt the animal populations.  Still others subsist on small amounts of greenery that manage to survive in localized settings.

Every year many of the tribes migrate to the South Pole to enjoy the month-long burst of warmth.  This month is accompanied by a massive burst in biological production, with new vegetation and insects feeding animals.  Those animals are hunted by the tribes.  It is feast time!

But during this month the population density goes from very low to very high.  There are skirmishes between rival tribes and the occasional battle.  This is also the time for inter-breeding between the tribes.  This is of vital importance to maintain genetic diversity in each isolated tribe.  The tribes have an agreement about how things go during

I don’t want to make this post too long so I’ll lay out a few more specific ideas:

Story 2 takes place on a hot eccentric Earth.  The climate is Earth-like when the planet is far from the star but dangerously hot during close approach.  The branding spot is deadly hot.  It is a ring located at about 70 degrees North (a little North of the Arctic circle on Earth).  Along the branding ring the temperature gets up to 100 degrees Celsius (the boiling point of water; 212 degrees Fahrenheit).  This only lasts a couple of weeks during summer (it’s shorter than in the icy world described above because the planet’s orbit is closer to its star).

The planet is covered with life.  But the Northern-most part of the planet is abandoned during the summer.  The population flees to the South to avoid the heat.

The story follows a small band of over-ambitious hunters caught too far North.  Summer  approached too quickly and they were trapped North of the branding line.  Their only hope: to go North.  Since the maximum heat is right at 70 degrees latitude, they hope to get to the Pole where it is (a little bit) cooler.  It’s a story of survival (or not) in extreme and changing conditions.  All sorts of cool things to imagine….