Today’s job: putting it all together to build the ultimate Solar System.

Let’s look at our ingredients.

We can arrange these ingredients in any way we choose.  Our goal is to pack as many worlds as we can into the habitable zone.  We can use our ninja tricks (co-orbital planets and moons).  But the system must remain stable for billions of years.  It won’t do us any good if there is a dynamical instability that sends a bunch of habitable worlds falling onto the star.

I am torn between two ultimate Solar Systems.  Both are awesome.  The first one only contains Earth-sized planets.  The second also includes gas giant planets with Earth-sized moons.

ULTIMATE SOLAR SYSTEM 1.  Let’s only include Earth-sized worlds.  No gas giants.  As we saw, the number of planets we can cram into the habitable zone depends on how big they are.  Bigger, more massive planets need to be more widely spaced.  And for maximum orbital compactness we want planets that are all the same size.  I’m going with planets that are half the mass of Earth (about 80% as big as Earth).  Planets of this size definitely satisfy the criteria for habitability.  I guess I’m a little nervous that the very smallest planets in our chosen mass range might be borderline habitable.  And we don’t want to end up with a system full of Marses!

We can fit six stable orbits into the habitable zone.  Each orbit has two sets of binary Earths.  These are Earth-sized planets with Earth-sized moons.  Each binary planet is in a Trojan (co-orbital) configuration with another binary planet, separated by 60 degrees on their orbit around the star.

Most of the worlds are Earth-like in composition with oceans and continents.  But I threw in a few water worlds and few desert worlds.  Good vacation spots!  I especially like the binary Earths that consist of a desert planet and a water world.

ULTIMATE SOLAR SYSTEM 2.  Now let’s include gas giant planets.  We can fit the orbits of four gas giants in the habitable zone (in 3:2 resonances).  Each of those can have up to five potentially habitable moons.  Plus, the orbit of each gas giant can also fit an Earth-sized planet both 60 degrees in front and 60 degrees behind the giant planet’s orbit (on Trojan orbits).  Or each could be a binary Earth!  What is nice about this setup is that the worlds can have any size in our chosen range.  It doesn’t matter for the stability. 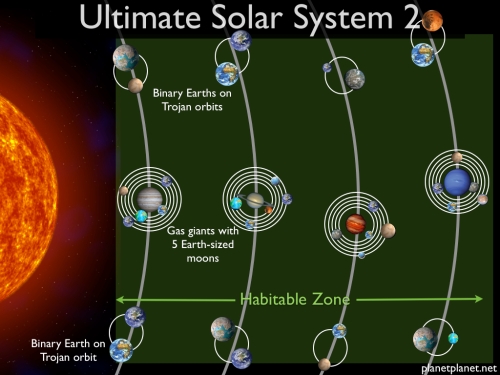 As in ultimate system 1, most worlds are Earth-like with oceans and continents.  With the odd ocean planet and desert planet for vacations (or, why not, for prisons).  There is a lot more variety than in ultimate system 1 because the planets don’t have to be the same size.

The systems of large moons around giant planets would feel the effect of tides.  I made the moons a bit smaller than the planets within the binary Earths to avoid making tides too strong (since they can cause massive volcanism).  Realistically, the innermost moon of each gas giant might very well get roasted by volcanoes, like Io orbiting Jupiter.  That would still leave 32 habitable planets in the system.  Not too shabby!

Which should we choose as the most ultimate?  Ultimate Solar System 1 or 2?  Hmm……

Here comes a ninja master move!  We don’t have to choose between our two ultimate Solar Systems.  We can put them both in a binary star system!  Of course, binary stars do pose a threat to planetary systems.  This was actually the subject of my very first post on this blog. A binary star that is too close destabilizes orbits in the habitable zone.  A binary star that is too far away gets kicked around by very distant stars (really!) and ends up disrupting planetary systems.  But a binary separated by about 100 AU should not disturb the orbits of our ultimate systems.  Especially since the habitable zone is pretty close-in.

The ultimate Solar System makes a great setting for storytelling.  Just imagine!  Wars between moons orbiting the same gas giant planet.  Coalitions, alliances, trickery!  High-end worlds with their own dedicated beach moons.  Worlds launching long-range missiles at their Trojan counterparts.  Intelligent beings who learn orbital dynamics at a very young age.  Prison worlds that revolt!  Plus, if one species took over all of the worlds orbiting one of the stars, there could be a whole other series of battles with the worlds orbiting the other star.

There you have it.  The ultimate Solar System according to me.

Update: The Building the Ultimate Solar System saga continues in part 6, where we pack even more planets into a system with many stars.

[There is an awesome game called Super Planet Crash that lets you build your own planetary system and see how the orbits evolve.  It’s super addictive so watch out!]

EPILOGUE: To finish things off, let’s get to the why.  Why did we go through this exercise?  What was the point?  This is a question I ask myself on a weekly basis.  With all sorts of problems affecting humanity — global warming, terrorism, obesity to name a few — why do I spend my days thinking about planets so far away that we will not reach them in our lifetimes?

I don’t have an answer that will satisfy everyone.  I don’t even have an answer that always satisfies me.  I admit that I do get into funks during which I can’t justify what I do to myself.  I get seriously bummed out.  But whenever I talk with almost anyone about what I do, they are fascinated.  People love astronomy.  They love planets.  They want to hear about planets around other stars.  Planets that could have life.  And they want to know the answers to the questions that I’ve been asking.  Honestly, I think it is that interest from other people that gets me through those funks.  That reassures me that I’m doing something worthwhile.  Something that people care about and are interested in.  And that makes me want to spend time writing this blog.  To get people thinking about planets and life.  To keep people using their imaginations and asking questions.  And to show people that science is inherently fun.

So thank you to everyone who has ever been interested in what I do and given me a boost.  Thanks to several of my teachers.  Thanks to my friends (Andrew West, Ken Sherbenou, Jonah Shaver and Franck Selsis come to mind).  Thanks to my parents.  Thanks especially to my wife Marisa and my sons Owen and Zachary.  You make this all worthwhile.

80 thoughts on “Building the ultimate Solar System part 5: putting the pieces together”